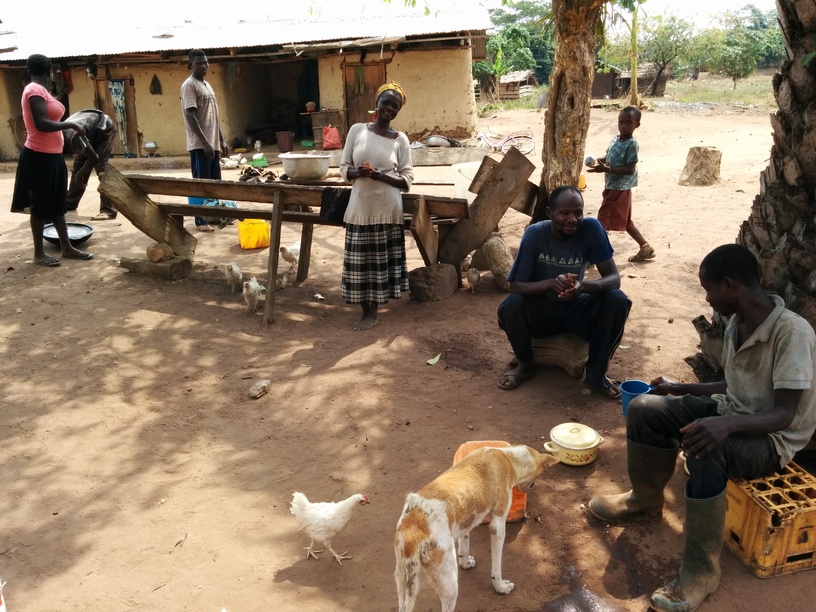 Aframano is a village in the Ashanti region of Ghana, with about 520 people, divided into 68 households. The villagers are farmers, and their principal crops are cassava, plantain, corn, yam, groundnuts, and tomatoes. The crops mostly feed the community, but they sometimes produce a surplus to sell. Some of the people are indigenous to the Ashanti region, but a large number are migrants from northern regions that have become too dry for farming. There is a primary school with six classrooms and a junior school with three. These buildings are solidly built by the government, but the houses are generally built from mud and sticks, or from mud bricks. They have thatched roofs, or sometimes corrugated steel roofs. Electricity lines pass nearby the village but the village is not yet connected to it. When I went in 2017, they said they expected to be connected within 3 months. Now, in 2020, they are still waiting.

At the time I visited in 2017, the villagers’ only water sources were the nearby Danyame, Nobuso and Afram streams. These streams do not dry up completely during the dry season, but they become very polluted, with agrochemicals and sewage. “You drink that water?” I asked, and the villagers who had accompanied us to the stream immediately demonstrated that they do. The village had had a borehole, but it had been broken for a few years. The community practised open defecation. There were no latrines in the village, apart from two four-seat latrines in the schools. They consist of a big trench with some tree branches across it, to provide an area to squat on. The most common diseases suffered by the villagers are malaria, diarrhoea and dysentery, probably mostly water or hygiene related. The community told us that about two out of ten babies die of water-related disease before age two.

About half of the adults have mobile phones, though. As they have no electricity, they have to bike the phones ten kilometres to the town of Kofiase to charge them. A few villagers have solar panels which can charge a phone, as well as sometimes having an integrated torch.

Ashanti Development profiled the village and we drew up a budget to repair the borehole and provide 60 latrines (one per household). Latrines are as important as the borehole for improving health. I decided to fundraise for Aframano, and started in April 2018. My colleagues, friends and family were incredibly generous. I had an very large donation of £1000 and two large ones of £400. But the bulk of the donations are the tens of smaller ones given by a lot of different people. All told, including my matched funding, and the gift aid we get on behalf of UK income-tax-paying donors, we raised £15581 by November 2018. 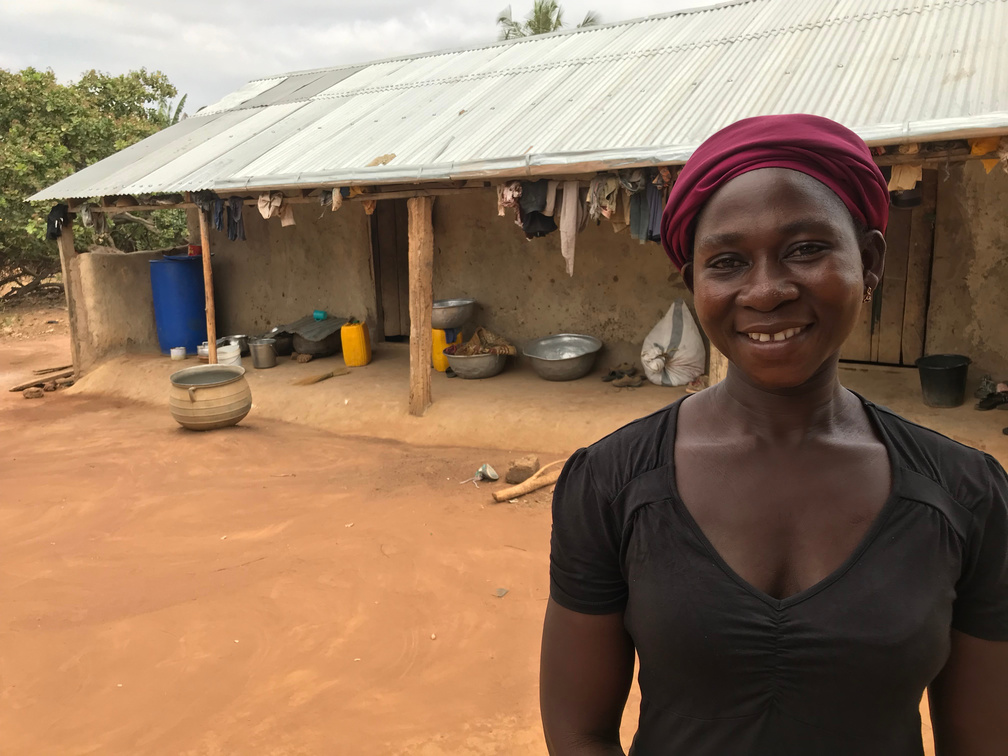 The latrines were built by Ashanti Development during 2018-2019. I documented some of the beneficiaries. Cecelia has six children, so eight people live in her house. They are delighted with their latrine. The youngest child is four years old, and I was curious to know if he had learned to use the toilet by himself. “Yes, but I have to open the door for him first”, she told me, and close it afterwards. I was concerned that a small child could fall through the hole, into the 3 metre pit. But I was told not to worry about that :-) 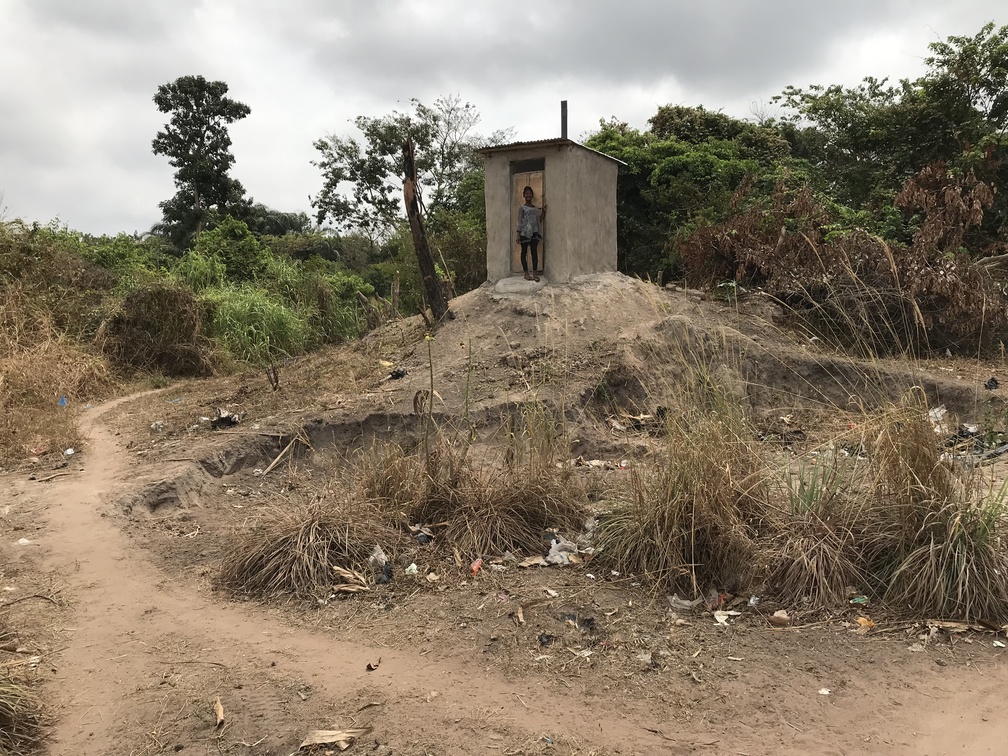 Sisovalice’s household latrine is sited at the top of a mound, where digging the 3m hole is easier

Sisovalice says she has used her latrine every day since it was installed on 13 November 2018. So have the 9 others that live in her house. In total, 61 latrines were built in Aframano. Because the soil is very rocky, it has been one of the most difficult latrine projects. Many holes had to be aborted after hitting rock at 2m, and the latrines re-sited.

By providing latrines and hygiene training about how to use them, the expectation is that the 20% death rate before age two will decrease dramatically. Training is important, because people may be reluctant to change their habits if they don’t understand the benefits. Without latrines, there is very high incidence of diarrhoea in Ashanti villages. 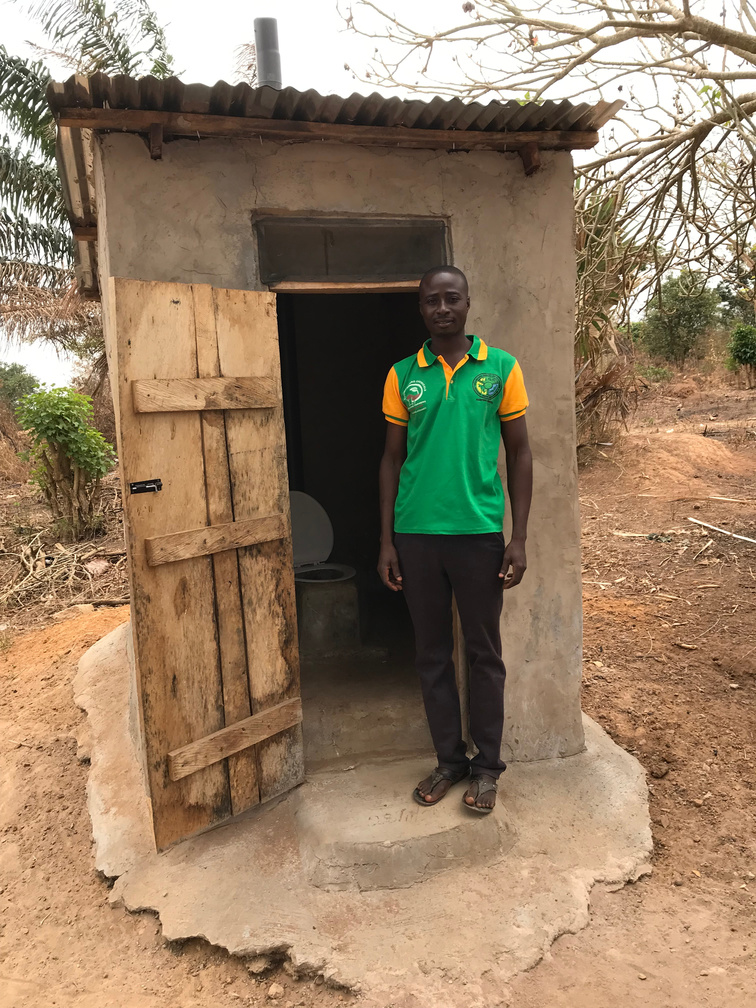 I talked with about about 6 different households, including that of the village “assembly man” (local councillor), Kwasi Alale. He’s aged 33 and is in his third term of being the assembly man. He has been re-elected in between my visits. He struck me as a very calm and sensible person, so I am pleased for Aframano. 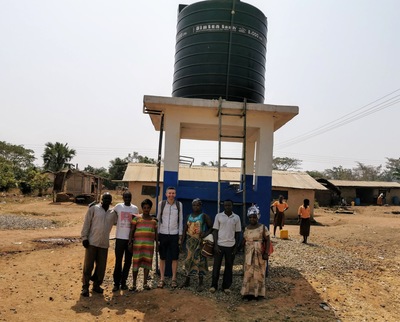 At the time of my first visit there was a broken borehole in Aframano, installed by an NGO that never came back. We repaired the borehole and “mechanised” it. This means providing a 5000 litre plastic tank and an electric pump to fill it. As the village isn’t yet connected to the mains electricity, the electric pump is powered by a diesel-powered electricity generator. Later, when the mains electricity is connected, the generator will serve as standby for power cuts. The pump runs for two hours to fill the tank, which lasts one or two days before it has to be filled again. 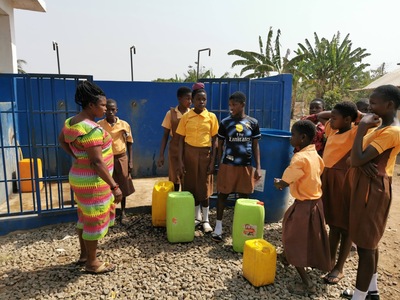 There are three taps, so that people can fill buckets from a tap fed by the tank. There are also three overhead outlets, so that the user can dispense water into a basin on their head. Villagers have to pay for the water, in order to pay for the diesel. The price is 20 GHp (3 pence in GBP) for a 20 litre container like the ones in the photo. At the moment, this price is just enough to pay for the diesel, but not enough to save for repairs. When the electricity is connected, the running costs will decrease so that a fund can be built up for repairs. 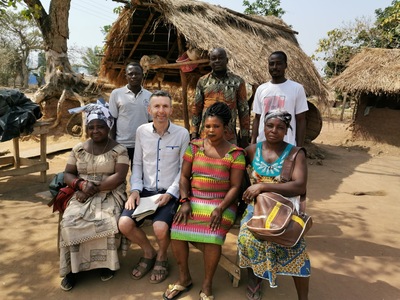 Water committee (but excludes me)

A water committee has been set up to run the borehole, including to collect the money and buy the diesel, and eventually to keep enough money to pay for repairs. A controversy arose a few months after the borehole was installed, and that delayed my reporting to my donors because I wanted to visit the village to get to the bottom of it. I did that in January 2020, and I’m very happy to report that everything is working very well. Pictured are (standing up) Haruna Mahmood (Unit Committee chairman for Aframano), Nicholas (Ashanti Development operations manager), Kwasi Alale (Assemblyman for Aframano), and (sitting down) Martha (volunteer), me (volunteer), Nana Pommah (Aframano Queen mother), Benedicta Traa (Aframano Water Committee treasurer). 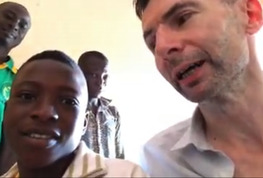 During my first visit in 2017, I met Matthew in Aframano, a very charming child who spoke good English. His story was a big part of my motivation for sponsoring latrines and the borehole in Aframano. He had told me that he went to the stream to get water for his family each day, before school. He would get up at 6 a.m., and do three round trips, carrying two large tubs of water on each return journey. The journey to the stream takes about 10 minutes, and I guess the return trip is more like 20 minutes if you are carrying 20 or 30 litres of water. And the water looked horrible. When I visited, the village pigs were grazing and wallowing in it. But it (and another similar stream on the other side of the village) is the only water the village had at that time.

In 2018, I asked to see Matthew again, and he could remember our conversation last year. I asked him what he thought of the latrines and the borehole. He thinks they are great.